On 18 June, Their Excellencies will engage in a conversation about the French-German relations and the European Union with students of Leiden University at our location Wijnhaven. Everyone is welcome to join this event online. 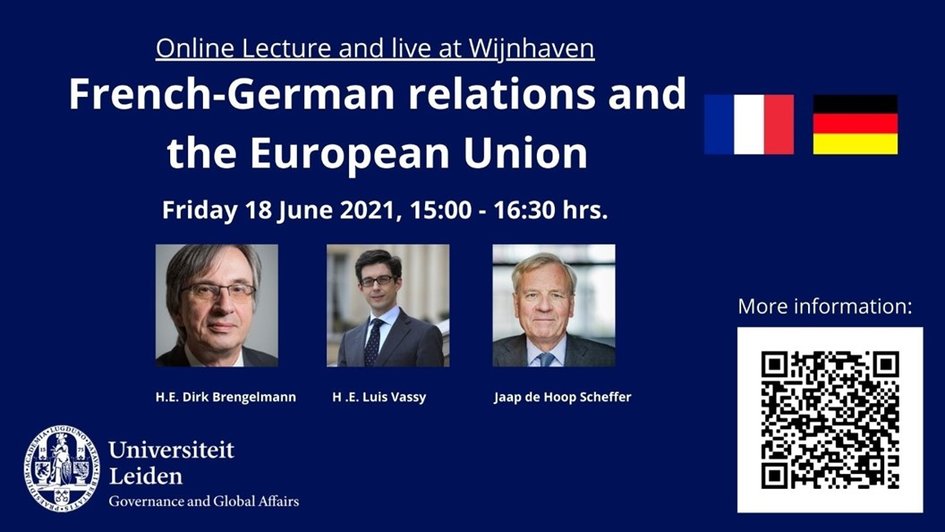 Main language : This discussion is in English

H.E Luis Vassy - Ambassador of France to the Netherlands In addition to serving as the Ambassador to the Netherlands since 2019, Ambassador Vassy also represents the French Republic at the Organisation for the Prohibition of Chemical Weapons (OPCW). His diplomatic career began in 2004, and he has held numerous portfolios under French Foreign Ministry since then, from being responsible for French-Indian relations to nuclear non-proliferation. He has been posted in the French embassy in Washington and has worked for different French ministries as cabinet director.

H.E Dirk Brengelmann - Ambassador of Germany to the Netherlands Before being appointed Ambassador to the Netherlands in 2016, Ambassador Brengelmann served as Special Representative for Cyber Foreign Policy at the Federal Foreign Office and then as Germany’s Ambassador to Brazil. From 2010 to 2013 he was NATO’s Assistant Secretary General for Political Affairs and Security Policy, where he advised the Secretary General on political issues, including NATO’s partnership relations and interaction with other international organizations.

Please register via this form.

Do you have any questions about this event, please contact : communicatie@fgga.leidenuniv.nl.